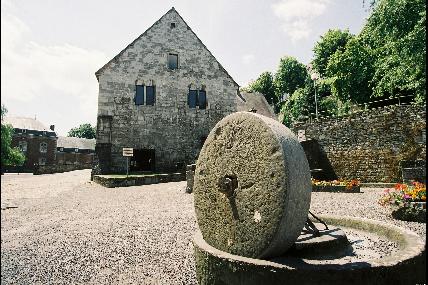 The Abbey of Floreffe was established in 1121 by St. Norbert, founder of the Premonstratensian or White Canons order. Its imposing structures were erected from the 12th to the 20th centuries and include the abbey church, which was modified on several occasions and contains the stalls of Pierre Enderlin. The main courtyard with its alternating 17th- and 18th-century buildings and 20th-century structures blends into the complex (Bloc Bastin and La Vigne).

In the Moulin-Brasserie at Floreffe Abbey, visitors can taste abbey products, including Floreffe beers and cheese.

This website uses cookies to improve your experience while you navigate through the website. Out of these, the cookies that are categorized as necessary are stored on your browser as they are essential for the working of basic functionalities of the website. We also use third-party cookies that help us analyze and understand how you use this website. These cookies will be stored in your browser only with your consent. You also have the option to opt-out of these cookies. But opting out of some of these cookies may affect your browsing experience.
Necessary Always Enabled

Any cookies that may not be particularly necessary for the website to function and is used specifically to collect user personal data via analytics, ads, other embedded contents are termed as non-necessary cookies. It is mandatory to procure user consent prior to running these cookies on your website.